Is it time to change your hard drive? 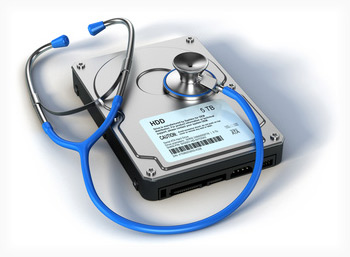 Just like other mechanical devices, hard drives (where your files and documents are stored) have their own working lifespan.

And when it becomes apparent that the end is approaching, it’s better to replace them.

These days all modern hard drives have a built-in self-test mechanism, called S.M.A.R.T.

Japanese programmer Hiroyuki Miyazaki has written a small free utility called CrystalDiskInfo. It helps you to check the health of your disk.

The major benefit of S.M.A.R.T. is that it will diagnose any problems immediately, without the need for a lengthy disk surface scan.

If you run a small business you probably take on a number of different responsibilities such as accounting, design, staffing, manufacturing, etc., and the task of replacing a hard drive and transferring information might be too complicated and time-consuming for you to handle on your own, so you give it to your IT administrator. However, diagnosing potential problems is something you can do yourself, easily and quickly, and it is definitely advisable to do it from time to time.

By the way, even if all the S.M.A.R.T. parameters are normal but the temperature reading is 40 degrees Celsius or more, it’s highly recommended that you install an additional fan on the hard disk, because overheating is a major cause of hard disk failure.

A few days ago my Windows 7 was slow at startup. I launched the “Event Viewer” from Administrative Tools, navigated to Windows Logs > System and saw a number of error messages like “The file system structure on the disk is corrupt and unusable. Please run the chkdsk utility on the volume SYSTEM.”

Launching CrystalDiskInfo on all the computers in the Daminion office resulted in warnings for 3 out of 15 hard drives.

We also scanned the “problematic” drives with HDDScan (the free HDD diagnostic utility), and found a few bad blocks on a couple of them. Experience shows that if bad blocks start to appear on the disks it’s time to replace them. We had to buy some new SATA III, WD 500GB disks.

Because of the floods in Thailand in late 2011 the price of hard drives rose significantly. WD and Toshiba factories and many of the OEM plants that produce parts for hard disk drives were flooded. Thailand is the heart of the HDD Industry. Although unaffected by the elements, many of the factories that produce HDDs in other parts of the world remained idle due to lack of HDD parts. Production is now back to normal but, in Russia at least, hard drive prices have not fallen to their pre-flood levels – I don’t know how things are in other countries.

Anyway, our information is worth far more than the price of the new hard drives, so we replaced them with new ones. I advise you to download CrystalDiskInfo immediately and check the health status of your hard drive.

Are your corporate digital assets still disorganized or you want to check this? Request a demo and get all your questions answered with one of our resident customer champions.

Unexpected Issue at The Beginning of Using a DAM Solutions. 2022 survey results!

Facial Recognition in the new Daminion Server is ready!